Showing posts from August, 2012
Show All

There are School Principals who are change agents 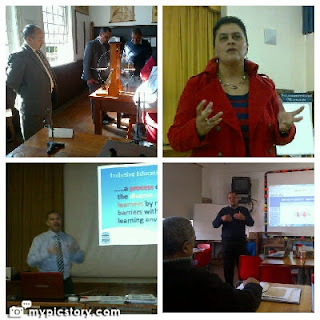 Bottom frames from Left: Brandon and Bevil in action at the Principals' meeting Today was one of those wonderfully uplifting days. Our education is undergoing so many changes that you get tired just thinking about the developments taking place. And while I was driving to our Principals' meeting   that was being held at the Centre for conservation in Wynberg, I listened to SAFM, one of my favourite radio stations when I am on the road. The National Research Foundation spokesperson was talking about the series of lectures taking place on poverty. I liked what she said about researchers trying to bridge the divide between themselves and the communities they write about.  "Community-knowledge building'" seems to be the buzz word out there. Now, this concept is not new to the community of school principals we serve. In fact, today, our meeting was dominated by two presentations facilitated by two of our principals, Bevil and Brandon. Here we are, enjoying the guided to
Post a Comment
Read more 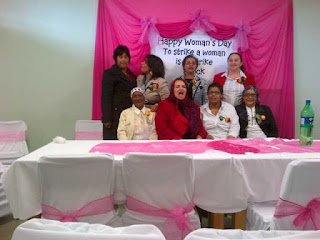 Women Staff at Prince George Primary School receives five-star treatment from their School Governing Body I was in awe of the Women's Day Celebrations that the School Governing Body (SGB) of Prince George Primary hosted in honour of  all the women at Prince George Primary - the educators, support staff, admin staff, parent volunteers at the school - EVERYBODY. Adele Campbell, the chairperson, was the brain behind this auspicious event.The event was fit for dignitaries of our communities - the bedrock of growing healthy communities - Women! Strike a woman, you strike a rock, says Prince George Primary SGB The programme was two-fold. The first part consisted of us honouring all South African women, present and past, who have helped to shape our future. Adele, a proud alumnus of the school, peppered her talk with humorous anecdotes of the women who have influenced her, a few of her teachers being teased endlessly for their contributions.  She says she is still a child of Lavender Hill
Post a Comment
Read more
More posts