Showing posts from January, 2013
Show All

There is only one newspaper journalist that I have seen using a pocket digital camera when he takes pictures for his articles. This is reporter, Raphael Wolf, a seasoned writer for the community newspaper, The Southern Mail.Raphael, also affectionately called Ray, is almost inconspicuous without his pocket camera. Most of Ray's articles appear on the main pages of this Cape Flats community newspaper that covers events happening in the Southern Suburbs. You will see the 15 cm camera before you see the owner at events.   A typical scene would be when a keynote speaker takes his(her) place at the podium, ready to make a speech. Out of the blue, you will see a man with camera moving almost within one metre of the speaker. As the speaker pretends not to see Ray and his moving photographic missile.Ray would be oblivious of the surroundings. It is just him, his camera and his target.   As the speaker tilts his(her) head to avoid direct eye contact, Ray too would shift his pose, the m
Post a Comment
Read more 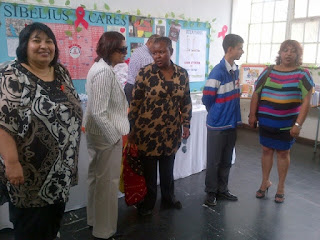 Sibelius High School's place in the sun Last year the Department of Basic Education held their World Aids Day (WAD) event at Sibelius High School on the Cape Flats. Jacques, a grade 10 learner at the school, was the winner of the HIV/Aids Life Skills Postcard competition run by DBE. Because he won, part of the prize was that the World Aids Day celebrations would be hosted at his school. Prior to the event, the national WAD project team visited Sibelius High school. A snapshot of what happens outside the classrooms They were fascinated to hear how the school drives its life skills programme. Sibelius High school, like most of the Cape Flats schools, is confronted almost daily with the brutalities of the socio-economic ills. Derrick Patience, the Head of the school shared a few of the horror stories they have to deal with. The group heard about the Grade 12 learner who successfully wrote her Maths P2 after giving birth a few hours prior to the NSC examination, the story of a learner
Post a Comment
Read more 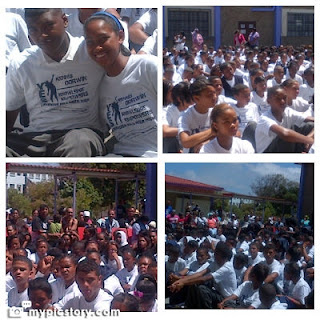 The T-shirt campaign at Lavender Hill is gaining momentum. Last year the school launched the humble T-shirt, emblazoned with positive messages as a physical, visual symbol to fight the high drop out rate of learners. Then, only the new Grade 8 recruits received their T-shirts and only a few staff members, the learners’ parents and many guests were present at the launch. This year was different. Lavender Hill High has decided to fasttrack the T-shirt campaign by involving all the learners from Grade 8 to Grade 12. This time the entire staff was witness to the T-shirt handover, together with the 1000+ learner population, sponsors and guests. Parents were there as well, of course. This was powerful stuff. The learners displayed a quiet confidence and excitement as they sat in the quadrangle – their makeshift ‘hall’ for assemblies. The heat beat down and I am sure the hard tarmac was uncomfortable, but there they sat, allowing us to take in this visual of   youth resilience. When the learn
Post a Comment
Read more

Our visit to the Taal Monument in Paarl 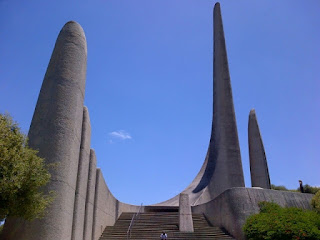 Walking in an art gallery with a difference... The Taal Monument viewed from the start of the walk. The pillars symbolise the influences of Asia and Europe on the Afrikaans language. The domes symbolises the African and Khoisan influences on the Afrikaans language. Two days before the end of our three-week camping stint at Berg River resort, we visited the Taal Monument. What an impressive, colossal structure! Even if you do not know much about the Taal monument, you can glean key information from plaques placed strategically as you start your tour of the Monument. We learn that Jan van Wijk, the architect designed the Taal Monument. He was inspired by two Afrikaans writers, CL Langenhoven and N.P. van Wyk Louw, both who paid tribute to the Afrikaans language. Jan van Wijk , inspired too by the natural environment, infused such elements in the design. The monument is an artistic blend of pillars and a set of three domes linked by winding curved open spaces. The various pillars symboliz
Post a Comment
Read more

Playing Cards that Life deals you – learning from a young man 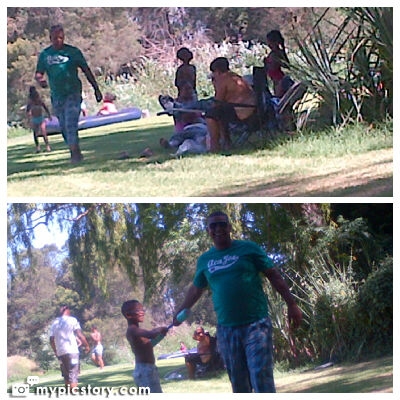 Memories of playing card games with our Dad. As children, our Dad loved playing board games and card games with us. We used to play dominoes, draughts and 11-card many a night.   The 11-card game was a fun game. Usually you are only allowed to place out all your cards in their permutations if you are going to win. My dad built in a concession: we were allowed to put out sets even if we had a “bad hand” and could not play all our cards to win. We were showed that there are possibilities even if success seemed light years away. We loved him for this because as time passed, we mastered the “Adult” version of the game. Our own set of cards on our life’s journey Strangely, life is just like that. We are often dealt a set of cards of life experiences on our journey to personal mastery. Often our sets of experiences seem to set us up for failure. One crisis seems to follow another and you seem to find yourself burdened with responsibilities or duties that hold you back, slow you down. Yet the
Post a Comment
Read more

Odds and Ends...How schools in Retreat surrounds wrap up their year 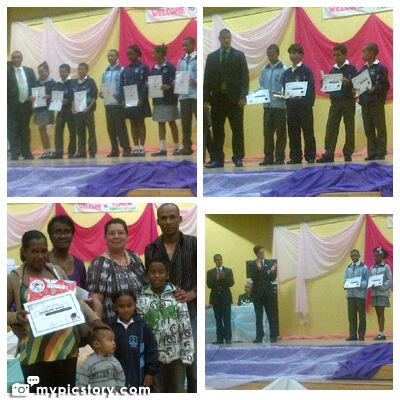 You know the saying: " the spirit is willing but the flesh is weak? That is exactly the space I found myself in during the last quarter of this year. I love keeping the blog current, and even with all the best intentions and with enough material to share, I could not find the time to write up a post. To make up for all the lost moments, this post is a wonderful potpourri of many inspiring moments I enjoyed. Prize giving events  There were many prize giving evenings I attended and each one of them was a glorious event. These events are usually well attended by proud parents who patiently sit and wait for that moment of affirmation or acknowledgement of their child's performance. What was striking for me is the increasing participation of the learners in these events. Joining Muizenberg Junior and Floreat Primary  At the Muizenberg Junior event, the entire Grade 7 learner corps participated in the annual report of their school year- covering all academic, sport and cultural acti
Post a Comment
Read more
More posts