- October 05, 2013
Last night, the Cape Town City Hall became an electrifying space when our Circuit 1 Schools Arts Festival erupted on the stage for almost two hours. This historic occasion for the circuit, in collaboration with the Safe Schools unit at our district, was phenomenal. 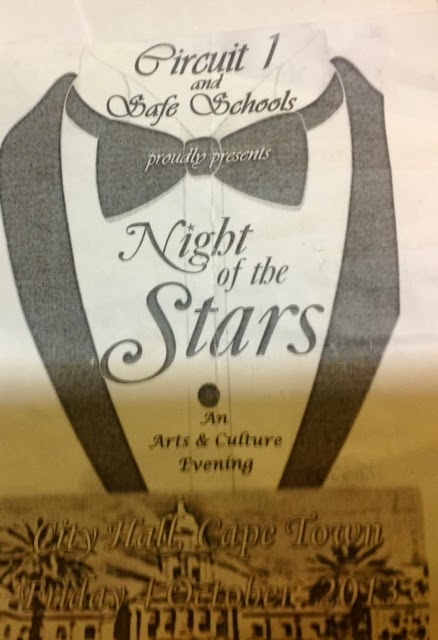 Why the City Hall became the pivot
The City Hall was chosen as our venue because of its inspirational impact and historic importance. Twenty three years ago, our Madiba, on his release from prison, made his first public reconciliation speech from the balcony of the City Hall.
Then last night, our 400+ strong cast of young creative arts performers made their debutappearance on the City Hall stage. Also, last night was the eve of World Teachers’ Day and the beginning of the last term of this school year. No doubt the conspiring powers of the universe were at work here to participate in the celebration of our young ones' gifts and to affirm the profound role of their teachers!
A peek into the flow of the Arts Festival
For two hours or so, our rainbow performers narrated via a polished blend of eclectic music ensembles, drama, song and dance, a Proudly South African story, gently reminding us to live fully and in harmony with ourselves and nature. On the same stage, these young, vibrant artists who hail from mainstream schools and from special needs schools, demonstrated inclusivity and ubuntu naturally and effortlessly. The captive audience applauded enthusiastically and voiced their appreciation openly with oohs and aahs throughout the show. There was such unhibited comraderie, such spontaneous unison…
Following the advice of our elders
Dr John Kani, known as the grandfather of  South African theatre says: “ Art is able to reach into the human soul and helps us to see ourselves better in relation to the outer world.” (City Press, 7 July, 2013).
Amen to that, Dr Kani.
This is exactly what has driven our 18 participating schools and the amazing Schools Arts Festival Project team, Astrid Mcclaughlin, Charmaine Samuels and Rowan Esau, and ourselves.

Vote of thanks
Thus we say to our movers and shakers: we salute each one of you for allowing the learners to stand on your broad shoulders. And, we also say: thank you, dankie, inkosi for allowing us to travel with you on this inspirational journey of possibility.
Arts and culture at schools Cape Flats schools drama driving the arts at schools school festivals