When five school leadership teams mess with my system, I celebrate. 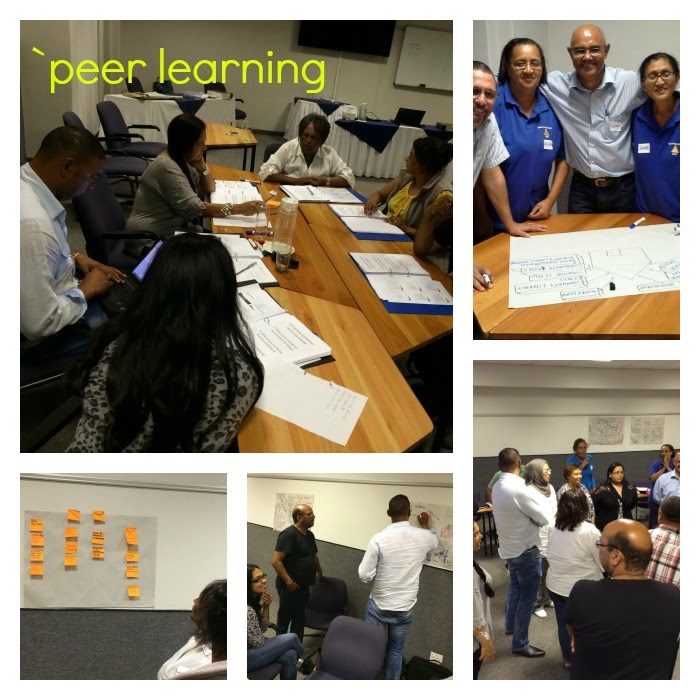 It is 6h00, Saturday, and I am sitting here in my room with bags under my eyes, waiting for the dawn to lift. The world is quiet out here at the Kromm Rhee Conference centre in Stellenbosch and the faint barking of a dog strains in the background. Here are five school leadership teams who are messing with my system and - wait for it - I am celebrating!


I am here at a 1,5 day SMT Leadership conference with five school leadership teams from Zerilda Park, Delta, Harmony, Sullivan and Lourier Primary Schools. Our presenters are heads of the neighboring schools:  Prince George, Square Hill, Steenberg and Floreat Primary Schools. These four school heads ( Lameez Rabbaney, Lavinia Davis, Cassy Dick and Noel Isaacs) will share ideas on systems thinking and leading in a culture of change. A health representative,  Physiotherapist Levona Johnson,  has been invited along. She will take us through targeted team building activities to underscore systems thinking and lifelong learning.


Yesterday we kicked off with systems thinking, led by Noel and Lameez.  We participated in activities to articulate our assumptions about our world. We focused on the familiar systemic tests and Annual National Assessments (ANA). The participants raised their ire about all the external factors that affect  learner performance.  Afrikaans learners performed poorly because of their language barriers and low self esteem issues, our participants argued. The two presenters acknowledged all these responses but steered away from giving textbook solutions. They merely moved on to the next step of their process.


We were given a snapshot of the context of international standardised tests: the rationale for conducting these tests, the nature of the tests and their implications for schools. Lameez then moved on to sharing their process of analyzing their learners' performance in the Systemic tests and the ANA. She confirmed that their school too, was convinced that Afrikaans learners were underperforming because of the reasons her colleagues had mentioned. Here is their story.


They used the following  indicators: grade, phase, language of learning and teaching and the teacher. Lameez showed us all the graphs that told the story.  The results showed that there was only a small difference between the Afrikaans and English speaking learners. That assumption that their school was locked into for many years has been shattered; it was a myth. I looked around the room to see the participants' response to this discovery. If they should do the same exercise, is it possible that they will arrive at the same conclusion as Prince George Primary School ?

Introduction to the Rich Picture technique.

Then the Rich Picture technique was shared with the group. This time the group was asked to identify one historical problem they were experiencing at school and had to apply the Rich Picture technique to brainstorming the problem. This was new to most of the participants. They struggled to write down all their thoughts because they are used to sifting mentally and rushing consensus on what should be written down.

Here this traditional speed-train process was turned on its head; everything had to be recorded in an unstructured way. Every single thought mattered.  Now,  everybody was forced to suspend judgement until they had exhausted all possible factors, no matter how unrelated they may appear. We were learning the slow-fast problem-solving style. The newsprint slowly filled up with post-it notes and the   voices flowed.

As a finale to the evening the SMTs were asked to spend about two hours reflecting on their own schools by answering the following questions:

These are three simple questions yet they are steeped in complexity. The SMTs went into their own world and we left them alone.

Teach a man to fish

At 23h00 the group was asked to vacate the conference room because the caretaker wanted to set the alarm.  I loved this development! But, sleep was not to be.
By 23h45, Lourier Primary School and Sullivan Primary School were sitting in the lounge under dim light, deep in conversation.

I quietly slipped into my room and sat on the bed. My mind was racing with one refrain: We need to free the schools from our shackles. We need to create MORE opportunities for school leaders to learn from their peers. We should create the fertile conditions for schools to grapple with a deep understanding of their world by presenting them with 'travelling theories' as Michael Fullan says somewhere.

Getting ready for day 2

So here I am, clunking out this post. My fatigue is really a minor issue. The energy, the passion and the hunger of these 25 school heads to extend their working week at the end of a school term, away from their families, is mind-blowing!

I hear waking noises down the corridor. We are ready for day two where Cassy and Lavinia will take us to have a conversation with Michael Fullan and his Six secrets to successful change. I am thoroughly impressed with the team of presenters and the 20-strong school leaders who are courageous to confront the brutal facts.

SMTs need far more conversation opportunities than an isolated breakaway, but this is a start.


What are your experiences as a school?  We would love to hear how you can add to the conversation...