Prince George Primary School learner will be starring in the local film,Tess 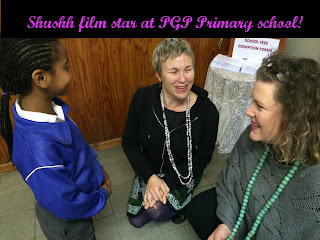 I visited Prince George Primary School in Lavender Hill this morning to perform routine administrative work and as a bonus, I met one of the children actors who will be starring in the film, Shushh. Petite Tashanay looked like a seasoned actress as Meg Rickards, the director of Boondogle Films, congratulated her for being selected as one of the actors in the film, Shushh.

"She is a natural", said Meg. "She knew all her lines at the audition and she immediately got into character.  There were many other hopefuls from the school and other local school, but she shone."

The film, Shushh, is based on the book, Whiplash, written by Tracey Farren. The film will be shot in Muizenberg that is about five kilometers from Lavender Hill. Tashanay Daniels, the Prince George Primary School learner, will play the role as the daughter of Bonita, a prostitute.


Our young star is the perfect match for this role. According to Lameez Rabbaney, the principal, Tashanay, whose guardian is her grandmother, is one of only two learners who brought back the signed form that gave consent for them to participate in the audition for the film, Tess.


"Many learners went for the auditions. Although parents did not return the consent forms, we did not want our children to miss the opportunity, " said Lameez Rabbaney.  I am excited that Tashanay clinched the role because she is good."


Meg Rickards said, "The film aims to highlight the violence and abuse that women face. There is this uncomfortable silence around these issues, a "Shushh" phenomenon with its challenges that we explore in the film."

The creative arts are alive and well. Here we have local filmmakers who are producing a film based on a book written by a South African and one of the child actors comes from the often 'shusshed' neighbourhood of Lavender Hill!


I look forward to seeing the film, Tess.  I may even read the novel before then.