We are all gaga over Princess Bella

- October 29, 2012
My word... just when I thought our empty nest is closer than we think, we become the extended parents and siblings of our latest arrival.

Everybody was in an expectant frame of mind because our latest addition to the family was due to arrive on Sunday. The two pappas - Brett and Christo - had paid the lobola money so that Mamma Sasha could finally have her Princess.  Ooooh... and we agonised over names just before Princess Bella arrived. Mamma Sasha had us all write down names that went into a draw and Princess came out tops. I opted for Kia and later Venus, but no, the jury had decided: our green-eyed baba was going to be Princess. Bella was another favourite by Pappa Brett.


Even the cost of Princess was negotiated. Brett claimed he had no 'naming' rights and thus he would pay less.    I of course, made a forced payment after advancing the loan for the labola due. When the money was repaid after much haggling, may I add, there was a hundred rand short.  I suppose one could say I have some rights to Princess now too.  Sunday finally came and there arrived our brawny, green-eyed 3-month old darling.

No sooner had Princess Bella arrived when the cuzzies made their appearance to come and meet Princess. It was examination time and after that the celebration. So much coo-ing and examining - yep, they were satisfied that the Princess was a pedigree pitbull - and thus a trip definitely worth making to see her.

The atmosphere in the house is amazing.  Everybody is fussing over Princess and she thrives on all the attention. Her first night found her tugged safely in Big Daddy Basil's arm while every now and then a set of eyes would appear in our bedroom - just to make sure we were treating Princess as royalty.

There is quite an adjustment in the house. Princess is not potty-trained so any available space becomes her throne. Also, the newspapers scattered all over to catch any stray spraying or worse - an unprecedented drop-off - remind me of the days when Kayla and Milo were Princess's age. How time flies! 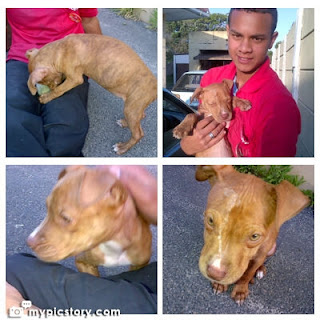 So, we are back to our pyjama drilling and back to shopping necessities like a blankie, a sleeping cuddly, a squeaky ball and a bone to keep our dear Princess happy.  Like all newborns she still nods off and as soon as a sun ray hits her, she curls up and goes straight to Noddy land.

Yep, we are basking in the glory of having our Princess Bella and the multiple disinfectant mopping drama happening... but soon she has to find out that the newspaper-strewn floors are not exactly a permanent arrangement and the Mamma and Pappas are going to have to start their doggy lessons pretty soon.

Although I was a bit hesitant about getting another dog, there is no greater joy than having Princess here.  She is indeed blessed because after our dearest Kayla departed, I never saw anyone taking her place.  That is the beauty of life - always a surprise or a gift somewhere; we just have to look...