Remember I have confessed that I was exhausted and merely held buoyant by the energizing space I found myself in? Thus, when my alarm went off faithfully at 5h45, I wanted to snuff the life out of my blackberry! Yep, Day 2 of systems thinking and peer learning have dawned and Rashida was already waiting for me to join her for our morning swim.  So, off we go, Rashida diving in and I- knowing my limits - walk purposefully to the shallow section as the entry point.
Our conversation becomes a tapestry of the day before and the shifts happening at Lourier. We celebrate the news of a new kitchen almost roof height and the arrival of an intercom system if the beneficiary comes to the party. Now and then our chat is punctuated with morning greetings to our Arise and Shine Women’s conference group and to our colleagues who have also started stirring to the sounds of Saturday.  We spend a glorious hour in the pool and then join the rest of the group in the dining hall for breakfast.  We don’t have much time because Jon is already hyped up, waiting to take us through our teambuilding repertoire. 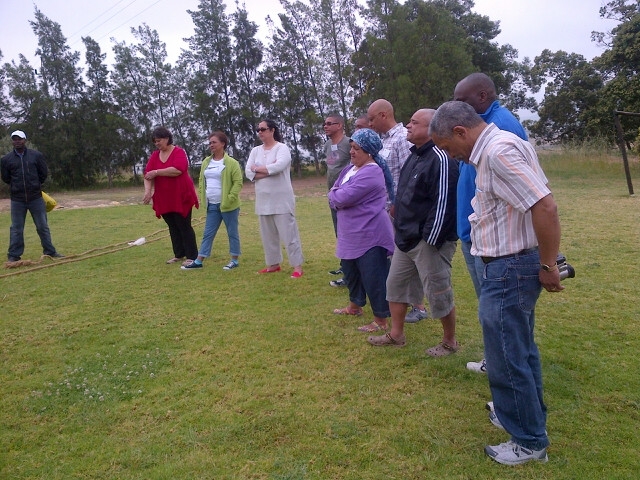 TEAM BUILDING FUN
The tug of war is a hilarious test of strength with the ladies on the incline trying to topple our male counterparts who have the downslope advantage. Even Velma who sat on the bench because of delicate knee challenges cannot resist the gaiety. Without any regard to helpless me – the anchor that went sprawling down to connect with blades of moist grass – Velma shoves the video camera in my hand and frog marches to join the madness.  Then it is time for crazy soccer, a variation of the game that Nakieba finds most traumatic. Although Jon had already explained the rules a thousand times, Nakieba’s animal instincts kicked in whenever she felt the ref was confused.I suppose if she could, she would have relegated him to a place on the Cape Flats soccer field because he insisted on following the ‘soccer path less travelled’. Jon paid scant attention to Nakieba’s contorted attempts at nailing the elusive soccer ball - happily changing the rules whenever he perceived a 'stuckness' in the air.
Joy seemed to love this ‘change the rules’ concept because at one point she did a Habana grip on the ball! The blindfolded tour had me doubling up at times.  The leader of the pack kept a straight face, gently coaxing a Fareeda gone auctioneer at every obstacle, Lameez perfecting the frog march over a vine branch and Fadiah going ‘crab’ along the path. Noel seemed to take everything in his stride and I suspect he elbowed the person in front because he walked at most times with such ease.
THE PRESENTATIONS OF THE DAY.
After much fun, it was time for Cassy to take us on our Michael Fullan journey – helping us to negotiate the “Six secrets of change”. Questions were the order of the day – apparently the research code – as we travelled with Cassy through each of the secrets.. Do we love our employees? Do we know who our employees are? Do we know that workshops have little value when it is not connected to learning while we work? The depth of Cassy’s reflective approach demonstrated personal mastery in action. Examples of good practice and gaps in practice were drawn from the presenter's own context.

Again, the participants asked the hard questions. Cassy was asked to explain ‘scary’ and we (the circuit) were asked whether we reflect on our own practice and if we are aware of the ripple effect through the system when we change the ‘blue’ calendar. Oops… there Juan had to raise his fingers from the Ipad and the downward glance to face the questioner  who swelled with the approving eyes of the masses.  The response came, the admission came,Michael and Colleen added their bits and the equilibrium entered the space… That was brilliant!
Then it was time for the SMT teams to share their reflections of the learnings and their context.  We were bowled over by the level of professional honesty and integrity that framed their presentations.  The systems-orientation of both presentations touched on the issues, the tensions between the not-yet shared vision and the structural forces. The context was not offered as an excuse, yet the context determined what was ‘being borrowed’ to deepen the shifts at their school. We hear that Levana and Lourier want to form a community of practice, we watch the circles of sharing, the deepening of insights and the unfolding of the open secrets.  Amazing, mindblowing stuff!
At some point Colleen remarks that she is sorry she could not join us the day before – she feels she has missed out.  I agree; the experience would have been richer for her who thrives on such energy.
THE LESSONS: The Joys of Living and Learning
As we head back, the jazz strains are soothing and we all seem content. Cassy and Lameez try to make themselves invisible by going absolutely quiet.  When Noel asks me whether we have achieved our outcomes, I give a resounding yes and a tired Michael Fullan Six secret analyst nods in agreement.
Yes, human agency is a powerful driver. The residential conference was driven almost exclusively by the senior management teams of five schools. The five Heads were there: Noel,Cassy, Lameez, Ivor and Rashida. And the two SMT teams were there: Lourier and Levana. We had 100% attendance by both SMT teams, 100% enrolment and willingness to facilitate the conference presentations by Cassy, Noel, Lameez as well as by Ivor and Rashida with their leadership teams. We had 100% attendance by the circuit team members who voluntarily agreed to join us on Saturday.
Now, can you understand why we are lyrical, why we want to shout from the top of Table Mountain that we are abundantly blessed to be surrounded by such social change angels – the guardians of our children who deserve nothing less?
Don’t you wish you were in our shoes to experience consistently expanding models of possibilities like we do?
THANKS TO THE MANAGEMENT TEAM AT JOIE DE VIVRE
All this was made possible by Bobbie - our angel and forerunner of this highly successful conference.  And, further investments came via Estelle, our nurturer for the two days, Mercy and Nomphelo and others who provided all the comforts and Jon who reminded us to think of Qunu when we become despondent at times in our spaces... Thank you in neverending circles...