Today I met 21-year old Zwelakhe Nofemele at the Lentegeur Psychiatric hospital in Mitchell's Plain. Zwelakhe was manning the Lentegeur Resource centre where there is small shop selling T-shirts. 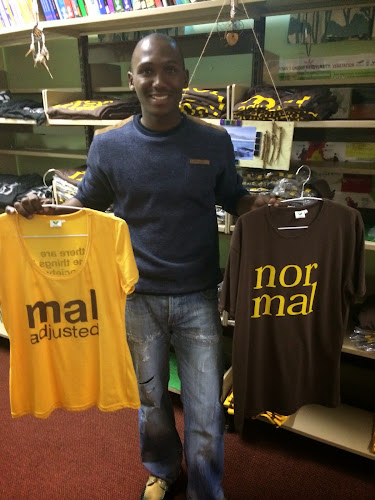 The T- shirt slogans catch one's eye immediately. I am hooked.Emblazoned across the t-shirts are the slogans as you can see on the picture: Mal / adjusted and Nor / Mal. The word "Mal" is an Afrikaans word meaning mad, mentally ill. Good gracious, I thought. Why would the very place where the mentally ill are supposed to find refuge and support, exploit their vulnerability? Society already stigmatizes those who have mental illnesses, now this? I asked Zwelakhe why these slogans gave been chosen. Zwelakhe became the storyteller.

" These t-shirts are part of a small business that is run by one of the past patients of Lentegeur Psychiatric Hospital. This man designed the slogans when he was a patient here. These slogans highlight the discrimination and the stigma that people with mental illness suffer. That is why the word "Mal" is on its own. But the slogans are also questioning what is "normal".

At this point, Zwelakhe flips the sweaters with the backs facing me. There are two quotations, one by Martin Luther King and the other one by Krishnamurti. 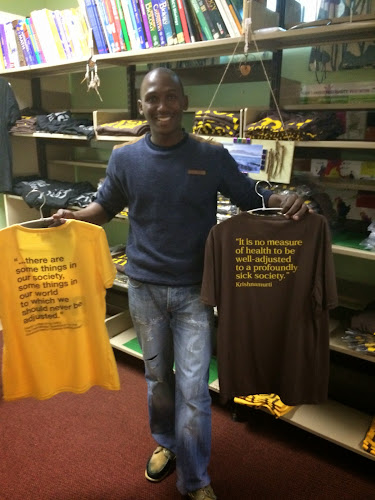 Enough said. Zwelakhe has made his point and we laugh like old friends.

I wanted to know how Zwelakhe got involved in the resource centre at Lentegeur Hospital. Zwelakhe's story is fascinating.

" I am actually an WESSA intern who has been placed here to help green the area at the hospital. We have already planted 30 trees, which you must have seen when you entered the grounds. We want to help green this hospital so that people who come here, come to a place where there is life, hope and a space to help the healing process. I am passionate about the environment and the green revolution.

I am by now fascinated with this confidant, well spoken young man. My questions come fast and furious. How did Zwekakhe hear about the internship and which school find he attend? While Zwelakhe was still explaining something, I would ask a follow-up question. He didn't mind this at all; he had a captive audience, he was a willing participant and amused by all this interest in him.

" I am from Gauteng and don't have family here in Cape Town. I saw the advert on the WESSA website, applied and I was successful but I had to come down to Cape Town. My father, a general worker at a school in Johannesburg, gave me his savings to fly down to Cape Town. At the airport, I asked people where the nearest township was. They told me Phillipi but said it is too dangerous and I should go to Khayelitsha. When I got to Khayelitsha, I looked for accommodation and was told I have to rent a shack. So I rented a shack in Bongweni. Now I am here.

I wish you could see my face with open mouth, speechless. ""Yoh," I said. "You are amazing!"

"And, I was in Cape Town before, in 2011. Then I worked as an intern at the community health centre in Khayelitsha. A woman, Mavis, said I should hand in my CV (that I didn't have) and then I can have a job there. I met a friend who helped me compile my CV, handed this in and then got the job."

"What drives you to be so adventurous and determined?" I asked.

Without hesitating, Zwelakhe asked me: Do you know "The pursuit of Happyness"? Now, that is me. I will make my own happiness happen. I am not going to wait for an opportunity. I am taking my chances and all the opportunities that come my way and, I will make them come my way. That is what drives me."

Speechless again- me, the chatterbox!

Zwelakhe is a mere 21 years old with the zest for life like a college freshman. Yet, Zwelakhe has the wisdom of a man twice his age, the life experience way beyond the normal 21 year olds in our country and so much self-belief and resilience that he WILL be successful.

Keep on keeping on, Zwelakhe. You have another cheerleader in your corner!