If you ever yearn to be grounded and to escape to a world of magic, do yourself a favour and go there where the real people are. Go to a community celebration and you will experience "earthing".

This week I attended the Women's Day Celebrations that was held at Seawinds Health Clinic. Seawinds Clinic is situated in Seawinds, a sub-economic township adjacent to Lavender Hill. It serves the Seawinds area and the growing informal settlements to the east of Lavender Hill as well as the Capricorn sprawling township area. Here the inhabitants live side by side with T. S. Elliot's hag, Poverty.

Nothing beats the feel of real grassroots community functions. People just don't have that frozen look about them at such events. Their eyes will follow your every movement and they will even turn their bodies if they have to do so to keep the picture and story in focus. They don't hide their curiosity. The best part is that they talk back while you are busy talking.

The opening ceremony started a bit late because the clinic staff was waiting for more women to join us. At one point I stood outside, watching the folk passing by. A woman left the clinic, limping and talking to herself. When she saw me,we greeted and without any inhibitions she said: " Daai injection was nou seer jong; kannie nou nog sit en wag virre 'n speechie". ( the injection was sore and I can't wait now for speeches). Off she hobbled, having satisfied my curiosity and having offered an apology for not joining in on the fun.

Finally we were ready to start and all of us were seated for the opening ceremony.

The programme director was becoming more animated as the opening ceremony progressed.The people talked back, making the conversation interactive and entertaining. Our MC's warmth and good rapport got the crowd laughing joyfully at times or agreeing loudly with certain comments. While waiting for the singer to set up his CD, the programme director was forced to fill this gap. He announced he was going to tell a joke, quickly checking to see if the singer was ready. Clearly, the MC had not anticipated this pause. Up popped one of the women.

"Please use English because all of us don't understand Afrikaans." She said, and then sat down. This caught our programme director slightly off guard, but he quickly recovered.

"Okay,"said our impromptu stand-up comedian. "Just this once, hey. I must tell this joke in Afrikaans, okay?" he repeated these words like the stuck CD a metre away. Fortunately another woman in front- with a broad smile flashing a few missing teeth, said : "ja, okay, net vir nou dan moet os ma Engels praat" ( it's fine for now, but then we must switch to English).

Our MC repeated this refrain, got a nod from the woman who made the request, told the joke and everybody, including the woman who requested the use of English, chuckled with appreciation.Of course, we still had to wait for said crooner to grace the stage with his own pomp and ceremony. He was definitely somebody important and we were experiencing this nuanced status via the delay.

Prior to the opening ceremony, I met a senior person who asked me rather offhandedly who I was. After I had cleared up my reason for being there, she somehow adjusted the tone and the knitted brows. ( Wonder what our sisters in the earlier exchange would have said?)

During our chat, I commented on the creative, community-centred initiative driven by the clinic staff. I praised their initiative to make the event a multisectoral activity by inviting Education, SAPS and the Department of Social Services to participate.

My fellow guest responded:" You see, they have the facilities to host such an event. You can't do such things everywhere. Blah...blah...".

The event, dear readers, was held at a standard community health clinic. Opposite the clinic are grey buildings and grey sand. In the distance and sharing a boundary with the clinic are small matchbox houses. The enviable facilities were merely a repurposing of dedicated rooms and spaces one usually finds in a community health clinic. According to the Clinic manager, the clinic had been extended and modernised about a year or so ago. But the facilities are basic. There is the waiting room where a few of us presented our talks and displays. The pampering activities took place either in the foyer or in the rather smallish consulting rooms. The opening ceremony was held in a section of the parking area. We even had interested onlookers standing in their own backyards, coffee mug in hand, watching us.

This exchange was so different to the one I had on the verge and to the tone set at the opening ceremony. This was, I suppose, the serious stuff in life.

I listened politely and nodded my head. I understood this kind of reasoning which I don't ever want to subscribe to. Seeing the light at the end of a tunnel as an oncoming train is a safer option for these converts. You don't have to dig too deeply to find possibilities that you can leverage. The sad fact is that leaders who are supposed to be empowering and set the tone for social activism, believe and act in this manner. No wonder we get stuck!

Fortunately, the folk at the Seawinds Health Clinic do not follow this suffocating drumbeat. 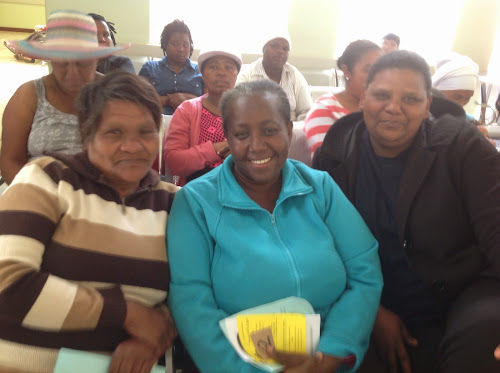 The amazing community-centred attitude displayed by the Seawinds Clinic staff and management was overlooked completely by my guest. Even the usual scapegoats - the drab environment and the poverty-stricken community the clinic serves - escaped blame this time because Ashley and the team debunked that thinking via this uplifting, innovative community event.

The women received five-star treatment. There were Pap smears, foot and hand massages, breast screening and food galore. There were talks about relationships, the importance of education for children and parents, social grants and domestic violence. At the end of the event, each of the special guests received a gift pack: a magazine, a snack pack and a laminated inspirational poem.

Ashley Fredericks, the social worker at the clinic, was the initiator and the coordinator of the event. He was fully supported by his manager, Sister Carollissen. When I had spoken to her about the planned event and Ashley's obvious passion and creativity, she merely smiled.

"When Ashley proposes some activity, we accept we are going to be involved. I give him the space to run with the idea. If the community is going to benefit, we go for it. But, his energy can sap you!"

I enjoyed the energy of the women at this event. That is why I love these folk who despite, their hardships, have not lost their spunk to express their feelings. When such powerful community events take place, we know too, it is usually driven by people who deeply understand what it means to serve our communities well.

Perhaps it is because they don't have the shackles of titles, ranks and policies weighing them down and drowning their sensibilities.

Well done, Ashley Fredericks and Sister Carollissen. You give us hope.