Turtle doves are living in our garden

- October 21, 2014
During the autumn months, our yucca tree became a sought after nesting ground. A pair of energetic robins were the first to arrive. They used to have long, lavish baths and worked round the clock to construct their nest. I couldn't wait to see the expansion of this family. The activity slowly wound down and as time passed, I noticed there wasn't much happening in the nest. I didn't even see the robins. The robin family must have relocated from our garden, I thought. 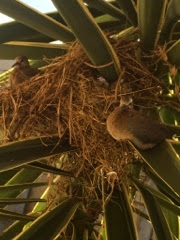 Then, a few weeks ago, I noticed that we had new arrivals. The nest in the yucca tree is now being occupied by a pair of turtle doves. The other day I saw one of the robins fluttering in the nest and thought the two families had probably set up home together. Not long afterwards, The robin flew off, leaving the turtle doves alone.
My, my... strange things happen in the world of birds too, I suppose. Apparently doves have this habit of forced occupation.
Anyway, so now I find myself watching these two birds. They continued building the nest for a while, but all this has stopped. I hope we are going to see the chicks which are expected after 15 days of egg sitting.
This afternoon's viewing was fascinating. Both birds were at home and seemed to be deep in thought. The one sat in the nest while the partner relaxed on one of the yucca leaves. Both of them kept a watchful eye on me as I tried to get a decent picture.
I quite like this strange pair and hope they do not move out soon too.
Turtle doves; birds in the garden